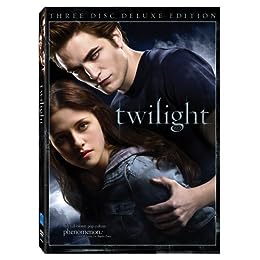 With so many Twilight DVD editions coming out, it’s hard to figure out which one to order. Most of the Twilight DVDs are special editions, and they each come with something different. Below is a breakdown of some of the various options that we have found.

Amazon 2-Disc Special Edition: Amazon is selling the standard 2-Disc special edition but if you want to watch it on release day, this is the place to order. It doesn’t come with any fancy pictures, but it DOES come with a code to be able to watch the digital version of Twilight instantly on release day through Amazon Video on Demand. Plus it’s only $18.

Walmart Standard DVD: This is just the standard Twilight DVD for $17.00. The 2-Disc special edition is $17.97 and includes the movie plus a 7-part documentary on the making of the movie, deleted scenes, and director commentary.

Hot Topic 2-Disc Set plus Film Cell: This edition contains the 2-Disc set plus a collectible film cell of Edward. There are 250 different images available, suitable for framing. It sells for $25.

Borders Twilight Special Edition with Booklet: As far as we can tell, this edition comes with the 2-Disc set (including Borders Book Club interview with Stephenie Meyer) and some kind of “booklet.” The descripion shows 10 exclusive postcards printed on pearlescent paper.

Barnes and Noble Twilight DVD set with Exclusive Free Phone Skin: B&N is selling the standard 2-Disc set but including a customizable Twilight skin for your cell phone, PDA, or MP3 player (from Skinit.com). Price depends on whether or not you are a B&N member (from $23.75 to $26.39).

Target Twilight 3-Disc Set: The Target edition is 3 DVDs plus a free iTunes download of the Twilight movie. It contains the 2-Disc set plus an additional disk of 45 minutes of “never-before-seen content.” This sells from between $18 and $23 depending on the day.

iTunes Twilight Download: Order the regular movie for $14.99 or the Twilight HD for $19.99. Order before March 21 and get a special code to download two extra hours of bonus material.

We’ll be adding different Twilight DVD Editions as we come across them.