You are here: Home / Twilight Collectibles and Jewelry / Twilight Umbrellas at Amazon

Just when I thought that I had seen everything you could get with Twilight on it, I came across three different Twilight umbrellas on Amazon. The umbrellas are made by NECA (which also produced much of the other licensed Twilight merchandise). They feature characters from the first Twilight movie.

Here’s the Edward and Bella umbrella: 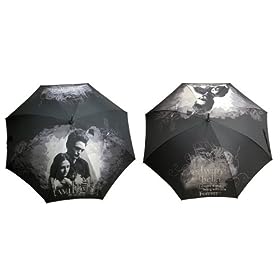 All three Twilight Umbrellas are available at Amazon for $19.99 each.