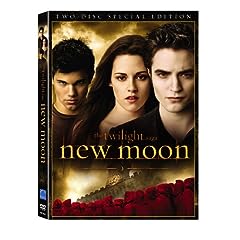 We’ve been getting a lot of questions about how you can pre-order New Moon. Although Amazon does currently list the Twilight Saga: New Moon 2-Disc Special Edition DVD Set, they are not taking orders for it yet. They generally start taking orders a couple of months in advance of the release. I’ve heard everywhere from middle of March to middle of April for the release.

I will update this post as more information becomes available on how and where to pre-order New Moon. For now, we do know that it will contain at least the following:

Something else to keep in mind is that there were quite a few different “editions” of Twilight when the DVD came out depending on where you bought it. Some came with digital copies as well. Others came with posters or collectibles. As we find out more, we will let you know!