You are here: Home / Movies and Music / Sexy Stars of Twilight from US Weekly 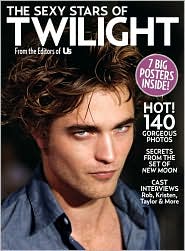 If you haven’t seen this on the newstands yet, you’ve got to check it out at Barnes & Noble! US Weekly has released a special, limited edition magazine titled “Sexy Stars of Twilight.” It contains photos of the Twilight movie stars and features behind-the-scenes information about the filming of Twilight Saga New Moon. It also has seven pull-out posters.

B&N visitors give the magazine 4.5 out of 5 stars. That’s pretty good! Most of the negative comments were only about Twilight in general and not actually about this magazine.

Because this was a magazine with a release date of June 26, 2009, it will not be available very long. It is, however, available for international shipping (unlike most other Twilight merchanidise). Check out Barnes & Noble for more information.