You are here: Home / Breaking Dawn / Order The Twilight Saga: The Official Guide 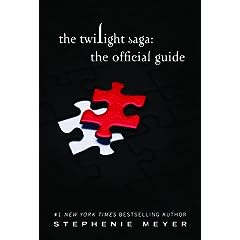 I’ve been receiving a number of emails this week asking with the Official Guide to the Twilight Saga will be out. We had originally heard that it was going to be released at the end of December. However, it appears that has been pushed back. While the different book sites are giving dates anywhere from February 1 through September 2009, one thing is certain–the book is NOT yet available but can be pre-ordered.

I’ve shopped around and found that the best place to pre-order the Twilight Saga: The Official Guide is Amazon. It is currently listed at $12.09 on Amazon, and it is much higher on some of the other sites.

Here is a little blurb about the book from Amazon: “This must-have hardcover edition–the only official guide–is the definitive encyclopedic reference to the Twilight Saga and provides readers with everything they need to further explore the unforgettable world Stephenie Meyer created in Twilight, New Moon, Eclipse, and Breaking Dawn. With exclusive new material, character profiles, genealogical charts, maps, extensive cross-references, and much more, this comprehensive handbook is essential for every Twilight Saga fan.”

I’ll let you know when I hear more about the exact date is should be released.